At work I've been tasked with optimizing performance on a not yet in production Ruby on Rails system (I'm still a Django dev primarily, but I'll work with anything) which relies heavily on ElasticSearch with many large, deeply nested documents. I enjoy ElasticSearch because it allows me to work and think differently than usual and I get the opportunity to really dig into it every year or two at work. This time around I have gotten to learn more …

It turns out that adding one more things that I feel I am required to do each week was not terribly helpful, so these fell off pretty quickly. I am still going to try to do this weeknotes idea, but they may really be more like monthnotes at times.

So it's time for Hacktoberfest again. I know I should contribute to real FOSS projects for this, but with a full time job and two young kids, contributing to real projects at any time feels like a pretty high level of commitment. Instead, I take the …

Learning more about AWS and Terraform

This week I got to dig into using Terraform to configure AWS Cloudwatch alarms for their ElasticSearch service. Overall it was easy to configure in a nice reusable manner. AWS even provides a list ofrecommended alarms which makes it easy to pick what to alert on. The only real issue I ran into is that the sns topics for email alerts cannot be configured via Terraform. It's not a huge issue, but means you can't just have Terraform create those, they need to already be there.

I also got the chance to play …

Since my rotator cuff injury riding in Guts, Gravel, Glory 2020 I have ended up with several weeks of physical therapy. With the therapy I have been gaining tons of range of motion and strength. This past week I was given the ok to start running again, as long as I take frequent breaks to make sure my shoulder is loose. I have been able to jump right back in running 6.5 to 8.5 miles 6 of the last 7 days. I stop every mile for a 2 minute break where I roll my shoulders and actively …

Upgraded the blog to Django 3.1 and Wagtail 2.10. In the process I discovered my middleware ordering was all out of whack and corrected it. I also began adding OpenGraph tags. I had removed Google Analytics a long time ago just to do what little I can to stop feeding information into Google, but I did want some analytics, so I am testing out clicky.com for now. I may eventually just host my own Matomo or Fathom setup. As far as I can tell, clicky is not working at all. … 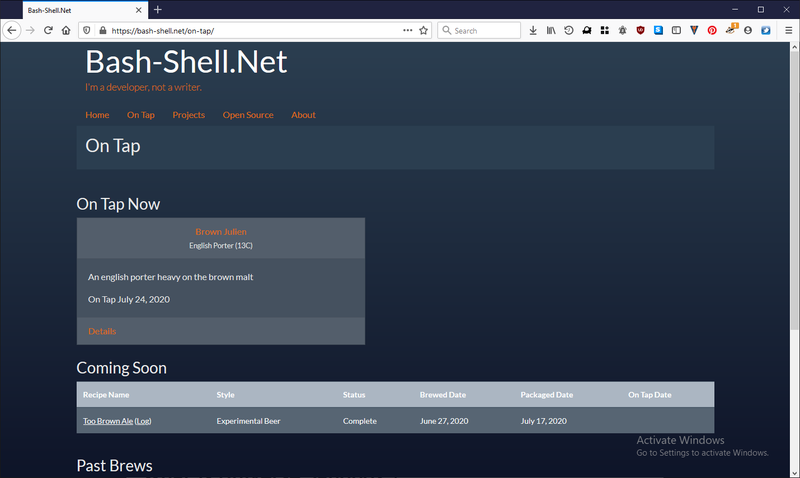 Earlier this month I decided to enter my first bike race, Guts, Gravel, Glory 2020. I lived on a bike in the 90s. Cheap Huffy and Murray BMX bikes and an entry level Raleigh mountain bike with a solid frame and front axle, but I haven't really ridden a bike since probably 1998. I finally decided in the fall that its time to get back on a bike because running is beating me up too much. I started out looking at mountain bikes, still being stuck in my 90s mindset that road bikes were for old people and professional …

I'm not a fan of the new year's resolution thing but at the same time, it is a good time to say "Hey, I'm going to do better at these things starting now" or "I'm going to try to do this thing within the next year".

I meant to post this closer to the beginning of the year, but hey, I'm following #1 and #2 already. I've also managed a few others at least partially already. I completed Sausage Sampler and my wife started laughing at me and says "What next, one for drinking beer?". A few minutes later she sees the friends or guild chat announcement that I completed Three Sheets To The Wind. Afer that, I figured Shanty Raid fit in well with the theme. By then I was out of achievements fitting that list, so I figured why not collect hidden cat statues.

Mother of a Fermentation Chiller

I've been doing the swamp cooler thing for maintaining homebrew fermentation temperatures for too long and have finally built a more controllable fermentation chamber. I used the plans for Mother of a Fermentation Chiller after doing some research and seeing how happy others have been with variations of it. It's lightweight and easy to move around unlike freezer and refrigerator based options and is inexpensive to build as long as you are ok with a big, ugly, box. I have seen people put wood enclosures around them which look very nice and would help insulation even more, but will obviously …

It's time for my occasional rework of the back end of this system and attempt to write more by making it easier and nicer to write. This time I killed two birds with one stone by adding Wagtail to the mix.

I stumbled upon Wagtail through work. We build a lot of custom CMSes at Mobelux and so every couple of years we take a look at existing solutions. In the past we've always found something unacceptable about all of them. This time when we gave Wagtail another shot, it was exactly what we are always looking for. The features …

I have been playing with Go on and off for a couple of months now and am really enjoying it. I could probably do a post just on why and what I like, but in short, it adheres to and encourages simplicity, obviousness, and explicitness that Python does (moreso than Python in many cases) while adding some new tools, implementation options, and deployment options.

Part of the explicitness and obviousness of Go is in function signatures. In Python you can have named parameters with defaults, so they are optional. You even have the *args and **kwargs parameters which take …

It's just a few hours until 2018 on the east coast. It's been an isanely stressful year so I'm writing this so that I don't forget how awesome this last week has been and how I'll make sure next year is awesome.

Dockerfile With Code or Separate?

As I've been working to improve my devops skills and knowledge, particularly in regard to using Docker, I have begun to wonder what the best way is to handle Dockerfiles and the rest of the Docker image build environment. Sometimes I feel that with the code makes the most sense, treating it like a Makefile or other build data. Now that I am looking for references suggesting the this technique I am having trouble finding them, but I have seen it often Here are a couple posts on the web which suggest that. This includes Amazon's ECS Continuous Deployment pipline …