This is the first of what will likely be a series of experiments in brewing a Baltic Porter with extra flavors from molasses, fennel seed, and cocoa based on a Russian Black Bread Recipe I enjoy. My end goal is to then use this beer when baking the bread. 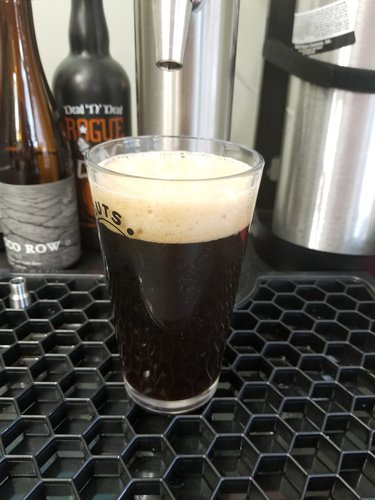 I did my usual full volume BIAB mash. I added grains when the water was about 159F and stirred for about 5 minutes. I then did a 70 minute mash, stirring again and checking temperatures at 20 minutes and 45 minutes. At 70 minutes I lifted the bag and squeezed as much wort as I could and then let the grain bag sit in a collander resting in a bowl to see if any more wort drained naturally before the boil was done. After some serious grain bag squeezing I took a sample to get a pre-boil gravity reading and let it sit in the hydrometer tube and cool while starting the rest of the wort boiling.

I boiled for 60 minutes, adding my Magnum hops for bittering immediately to give them a 60 minute boil. Saaz hops were added with 20 minutes of boiling left. Finally, at 10 minutes left I added about 2 grams (1 Tsp or so) of fennel seed and 4.4 Oz (by weight, not Fl. Oz) of dark molasses. I should have added cocoa powder at that point, but missed it, so 2.75 oz of cocoa powder was added at flame out and was about a 50/50 mix of Hershey's Special Dark and regular Hershey's cocoa powders due to what I had in the kitchen. I probably would have used all Special Dark, but just didn't have enough and did not plan well enough and check before starting. Afterwards I used my immersion chiller to get the wort down to about 70F (I love when the air and ground water start getting cold) and then transferred to a fermenter. The fermenter was then put into a fridge and cooled down to 55F. After the wort was cooled I pitched about 11 grams of S-23 lager yeast and got everything in the fermentation chamber.

As noted above, yeast was pitched at about 55F. I did not rehydrate the yeast. I pulled the packet of S-23 out of my kegerator which is set to keep things about 44-45F, let it warm just a bit, and pitched directly onto the wort. Wanting to play it safe with my first usage of lager yeast in several years, colder temps, and a higher alcohol beer I went ahead and pitched the entire packet into the just over 3 gallons of wort. My fermentation chamber is currently set up in my garage which does a good job of maintaining ambient temperatures in the 50F to 65F range at this time of year as long as the garage door stays closed. That should allow the temperature controller/ice/heater to easily maintain proper temperatures over the next two to three weeks.

The only real weird thing here is the roughly 3.2 gallons of wort into the fermenter. I plugged numbers into both brewtarget and https://biabcalculator.com/, my usual tools for this. I expected to end up with about 2.75 gallons going into my fermenter. Since my pre-boil gravity was about right, that suggests my boild off rate was low. That seems unlikely since I already use a fairly low boil off rate of 1.05 gallons/hr and right now the air is fairly dry and so should have boiled off more. Since it is colder, including in my house, it's possible I had a slightly less vigorous boil and I certainly lost less to steam while cooling but cutting my loss in half between those two seems very unlikely. Now I may have also had less lost to grain absorption along with that, but that's still a big difference since my grain absorption rate is also fairly low - I use biabcalculator.com's estimate which is lower than most people report on forums, but seems in line with what I have usually seen.

I have seen higher volumes of trub in the bottom of the fermenter. I do believe I have transferring more of the hot and cold break material and am doing slightly larger batches along with more grains for higher gravities, which may be contributing to that. The higher trub volume may also be contributing to the unexpectedly hight total volume, but this is over by more than that should account for as well based on the last couple of beers I have brewed.

I like to taste and smell the beer throughout the process. Prior to fermentation and a bit of aging my main concern is that I may have too much fennel seed. It smells great, but the flavor is stronger than expected. I thought I had gone fairly light based on the amounts of spices used in recipes I had looked at, including anise which should be similar. I currently feel like I could have used half as much - so about 1/2 tsp or 1 gram.

The cocoa powder is hard to judge at this point and I suspect some will settle out. but my first taste may have had a bit much of that as well, which may have been from undisolved powder in the mix. The amount I used was directly scaled down from looking at 5 to 6 gallon recipes using cocoa powder.

Hopefully as everything ages and the sugars ferment, it will all meld and come out decent. I'm not expecting perfect on the first try, but I sure am hoping to at least want to drink it and be willing to share it with friends.

Most people have been surprised by the use of fennel seed, but with its licorice flavor, it does not seem out of character for the beer since black licorice and anise are commonly used and have a similar flavor profile.

I checked about 9pm EST last night and saw the first bit of airlock action, so fermentation is well under way. This morning as of 6:30am the airlock is going consistently, there's a small amount of krausen on top, and the wort is noticeably more turbid with yeast. Temperatures are holding well at about 55F.

Airlock is still going at a solid 1 bubble/second or slightly faster and a thin foam is still at the top of the wort.

Airlock activity was even heavier for the last couple of days, easily two pops per second. This morning it is still going around one per second which seems like a long time to still be going that actively, but I don't really know. Temps having been holding nicely between 55F and 56F.

Yeast has settled and I'm at day 13 of fermentation so I took a gravity reading and a sample taste. My hydrometer read about 1.016 to 1.017 after correcting for the .002 to .004 it is always off - so it actually read somewhere between 1.018 and 1.020. Oddly, my refractometer consistently read 9 to 9.4 brix (it's always at least slightly blurry, although I got it pretty sharp this time), which puts me at 1.012 to 1.014 according to both Northern Brewer and Brewer's Friend refractometer correction tools.

I sampled some and the fennel seed flavor has definitely calmed down. I still tasted it at first, but it was not too strong. After a couple sips, I could possibly do with more fennel and the cocoa may be a bit too strong. But too strong cocoa is definitely far more drinkable than too strong fennel seed. It was also maybe a bit chalky, which is a risk according to one of the posts on https://byo.com/article/brewing-with-chocolate-tips-from-the-pros/. Because of that I have a bad feeling I've also killed my head retention. I'm not sure if I'm going to try cocoa nibs next or just pull back on the cocoa powder a bit. I may also swap the carafa II for black malt to give a bit more roast to go with the cocoa and may add some caramel malt to help head retention if necessary. I was a bit worried about the lack of caramel malts based on both Jamil Zainasheff's Zek's Porter and and Gordon Strong's Danzig using it when I did my research.

This beer went into a keg today. I should let it set a few more weeks at least, but really, it's probably going to sit until Wednesday night/Thursday morning and then get burst carbonated for sharing with a friend on Friday after Thanksgiving while we set up the Christmast tree. I sampled it again today while taking one last check of the gravity and today the chalkiness was mostly gone and the fennel seed flavor was much stronger. Next time I may pull back on both the cocoa powder and fennel a bit, maybe three quarter to half as much as I used this time. I'll have to see how it tastes when carbonated and at the correct temperature.

It's good! I burst carbonated the beer starting Wednesday night, leaving it to sit with about 30psi on it for 12-15 hours and then turned down to 15-18 psi (high for the style, but drinkable while keeping my Roggenbiers carbonated low for the style but drinkable) until Friday night. It turns out this is really good. More cocoa and chocolate than intended, but it's not gross or chalky, just a bit more chocolatey tasting than intended. It has strong flavors of cocoa and chocolate, a bit of coffee and roastiness, and very subtle hints of licorice from the fennel seed. The recipe may be a keeper in this state but I'm going to tinker a bit more just to see what happens. I am currently leaning towards pulling the cocoa powder back to 3/4 of what I used and possibly as low as 1/2 as much and then bumping the fennel seed up from 1 Tsp to 1.5 or 2 Tsp. It will be a few weeks before I re-brew this one, so I may change my mind as it ages.

As noted in my brew log for Russian Black Bread Porter Experiment 2 (2020-12-31) I have realized my mistake with the fennel seed and lack of flavor and so plan to make a correction to my process when I re-brew in the very near future.